If you visit pay a visit to our PT Hitham dan Putih website, you will notice photographs of statues adorned in robes bearing swastikas. This will be a familiar sight for anyone who has travelled to travel in Asia, particularly the Indonesian island of Bali. Pay a visit to this exotic island nation and you might be surprised to see the symbol you assumed had been long left behind since the 1940s: The Swastika. There is no need to be alarmed at this however, as in this part of the world, the Swastikas stands for anything but hate and intolerance. In fact, they are a sacred symbol of peace.

To westerners, it undoubtedly seems strange to see Swastikas prevalently displayed in public places. The appearance of the controversial sign makes perfect sense when you learn about the Swastika’s origin in this region. In its broadest sense, the Swastika stands for good luck and peace in Eastern culture, particularly in Buddhism, Hinduism and Jainism; three religious with large followings in Bali.

The Swastika has been a large part of Balinese culture for many centuries. The symbol can be seen on the Goa Lawah temple in Klungkung, in the south of the island.  Goa Lawah was established in the 11th century by Mpu Kuturan, one of the early priests who introduced Hinduism on Bali.

In addition to the Far East, the Swastika also has a surprising history in the western world which far predates the Nazi party. The first society-wide use of the Swastika can be traced to civilizations in the Indus Valley around a millennia ago. Archaeologists believe it first appeared to prehistoric Ukraine, where a carving of a bird made from elephant tusk and bearing Swastika symbols has been unearthed which is believed to be more than 10,000 years old.

The symbol experienced a resurgence in 19th century Europe, as a result of growing European interest in the ancient civilizations of the Near East and India. During his extensive excavations, the German archaeologist Heinrich Schliemann discovered the hooked cross on the site of ancient Troy. He connected it with similar shapes found on pottery in Germany and speculated that it was a “significant religious symbol of our remote ancestors.”

In the beginning of the twentieth century, Swastikas were widely used in Europe. It had no one particular meaning, it was just a general symbol sometimes used to signify a connection to ancient predecessors and others to represent good luck and auspiciousness. In a bid for greater public profile, the newly formed Nazi party created a banner that incorporated the then-popular Swastika as we all reognise it today.

Hitler was convinced that a potent symbol would rally the masses to his evil cause. With a black swastika (called the Hakenkreuz in German, or hooked cross) rotated 45 degrees on a white circle set against a red background, the highly striking banner was designed to add a modern twist to the ancient symbol while evoking the colours of the recently defeated German empire.

Because of this association with Nazism, the symbol has been a sign of hatred and intolerance in Europe since WW2, however, wherever you go in Bali you will always find the Swastika symbol and will hear the Balinese people regularly greet others by saying Om Swastiastu.

During Hindu ceremonies in Bali, you will often find Swastikas painted on baskets, trays, flags and robes. The symbol can also be seen painted on important Hindu buildings or temples.

For Balinese Buddhists, the swastika signifies the Buddha’s footprints and heart. For Jains, the swastika is the symbol of the seventh tirthankara (literally “ford-maker,” one of the liberated souls showing the way for others in the Jain tradition), with the arms symbolizing one of the four places a soul can be reborn in the cycle of birth and death. 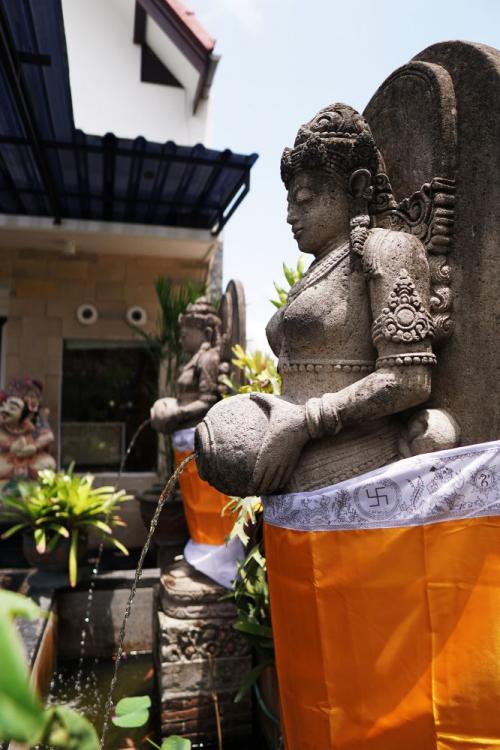 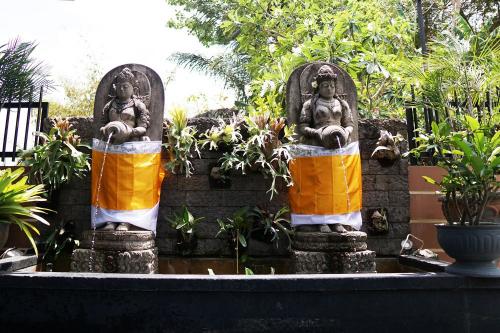